The Three Ws are:

I am reading a delightful review book:  Paris Runaway, by Paulita Kincer, from The Accidental Blog.

When divorced mom Sadie Ford realizes her 17-year-old daughter Scarlett has run away to Paris all she can imagine are terrorist bombings and sex slaves. After learning her daughter chased a French exchange student home, Sadie hops on the next plane in pursuit. She joins forces with the boy’s father, Auguste, and the two attempt to find the missing teens. The chase takes Sadie and Auguste to the seedier side of Marseille, where their own connection is ignited. Since the divorce, Sadie has devoted herself to raising kids and putting her dreams on hold, but when her daughter needs her most, Sadie finds that concrete barrier to life beginning to crack. In her journey, she learns the difference between watching the hours pass and living.

I started the book last night, and then kept reading until quite late.  I am loving the writing style; I feel as if I am there, following the characters in their suspenseful journey, enjoying the sights along the way, as well as the worst case scenarios the MC envisions.  I will definitely finish it today, as it is a hard book to put down.

Yesterday, I finished reading Dear Carolina, by Kristy Woodson Harvey (click for my review).  A delightful read with all the scents and tastes of Southern cooking, as well as the cozy comforts of the cast of characters. 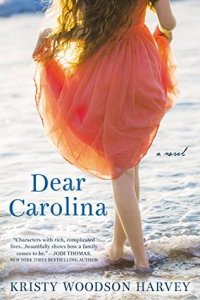 A book I have bookmarked on Amazon, which is coming out on July 26, is Valley of the Moon, by Melanie Gideon.

The author of the critically acclaimed Wife 22 has written a captivating novel about a love that transcends time—perfect for readers of The Time Traveler’s Wife, Time and Again, and the novels of Alice Hoffman.

San Francisco, 1975. A single mother, Lux Lysander is overwhelmed, underpaid, and living on the edge of an emotional precipice. When her adored five-year-old son goes away to visit his grandparents, Lux takes a solo trip to Sonoma Valley—a chance to both lose herself and find herself again.

Awakened at midnight, Lux steps outside to see a fog settled over the Sonoma landscape. Wandering toward a point of light in the distance, she emerges into a meadow on a sunny day. There she meets a group of people whose sweetly simple clothing, speech, and manners almost make them seem as if they are from another time.

And then she realizes they are.

Lux has stumbled upon an idyllic community cut off not only from the rest of the world but from time itself. The residents of Greengage tell a stunned and disoriented Lux that they’ve somehow been marooned in the early twentieth century. Now that she has inexplicably stepped into the past, it is not long before Lux is drawn in by its peace and beauty.

Unlike the people of Greengage, Lux discovers that she is able to come and go. And over the years, Lux finds herself increasingly torn between her two lives. Her beloved son is very much a child of the modern world, but she feels continually pulled back to the only place she has ever truly felt at home.

I fell in love with the cover, and then the blurb drew me in.  I have another book by the author that I have not yet read….but soon!