Good morning!  Welcome to another Sunday Salon, our place to meet and talk books, blogging, etc.

In spite of triple digit heat and a week spent with my youngest grandson, I managed to get in some blogging and reading.

Over at Creative Journey, I posted my check-in for Row 80; at Snow Chronicles, I posted an excerpt from Interior Designs; and my Weekend Potpourri took us on a journey via photos, books, and movies.

Earlier in the week, I started watching a recording of the movie Gone with the Wind.

I read the book several times over the years, but haven’t yet managed to watch this four hour movie. 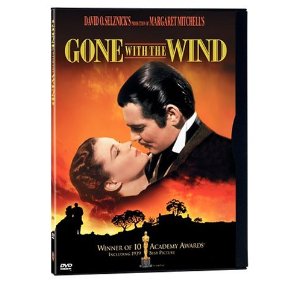 I watched about half of it, and plan to finish it today.

Yesterday I went to the theater to watch Hope Springs, with Meryl Streep and Tommy Lee Jones.

Great movie!  Loved the awkward and funny moments that characterized the marriage for these two characters.  Both were absolutely at their best in their performances.  Nuanced and quiet moments showed the inside of a very ordinary marriage.

The Next Best Thing, by Jennifer Weiner

What a week!  Hot, busy, but somehow productive.

Today I was planning to read a book from next week’s stack, but then this download arrived on Sparky, and greedily, albeit unexpectedly, I had to start reading it.  And when I finish it, I will have completed my A-Z Challenge, with the last letter of “Y” fulfilling that list.

You Are the Love of My Life, by Susan Richards Shreve. 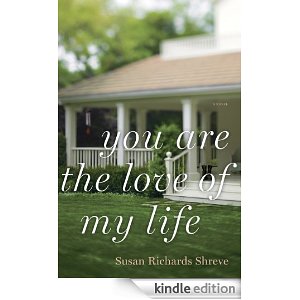 So far, we’re in the era of Watergate and a young mother who also writes children’s books has just returned to Washington, D. C., to the home where she lived when her father died.

What does your Sunday look like?  Come on by and chat.

When I began writing “An Accidental Life,” the first book that I would publish, my thoughts were focused on those accidental events (or moments) in life that seemingly direct or redirect our lives.

Falling into one path or another; making a misstep and finding oneself on a completely different journey; or just not making any choice at all and allowing things to happen on their own.

While I was writing this story, I was living in an A-frame house in the foothills where I had landed, almost accidentally.  A serendipitous turn of events brought enough money into my hands to buy the house outright. 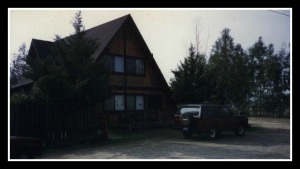 THE A-FRAME WHEN I BOUGHT IT

So naturally I wanted to incorporate some of these events into the story.  One of my lead characters, therefore, found herself living in such a house.  And the book cover, shown at the top of this post, also features the A-frame house.

Here is an excerpt:

From the front window of her A-frame cottage, Melody Vaughn glimpsed her son and a group of kids headed up the pebbled path.  From previous experience, she knew that Jason and his friends would party in his first-floor bedroom and if she played her cards right, she wouldn’t have to see any of them.  Jason had his own private entrance through the patio.  She could hear his key in the sliding glass door now.

On Jason’s eighteenth birthday, she and her son had entered into an unspoken agreement that his life and his choices were now his own.  She had only one cardinal rule:  None of those were to be thrown in her face.  Hence, the private room downstairs.  Melody seldom entered that room, which she knew had everything a young man needed to maintain a freewheeling lifestyle.

He had his stereo, a CD player, and a mini-fridge, well stocked with food and beverage.   He had several guitars, both acoustical and electric.   A spa sat center-stage on the patio and Melody knew that the party often spilled over to the outdoors.  She sometimes heard the splashing of revelers in the spa or the murmur of voices, punctuated by the occasional burst of laughter as one of his guests got carried away.  To his credit, Jason tried to keep a handle on things.  Probably because he knew that he had a good set-up; if he blew it, his chances for something similar elsewhere were slim to none.  He liked to spend his money on things other than rent.

Melody climbed the stairs to her second-floor retreat, settling in for the night.  Soon she could barely even hear the murmurs and within minutes, she had completely forgotten about Jason and his guests.  She didn’t want to know too much and she worked hard at keeping mellow.  She suspected that the people in this little foothill community between the two lakes, at the foot of Friant Dam, had their own theories about her life.  A small town had a rumor mill and because she kept to herself, she could almost feel the undercurrent whenever she went to the post office or the local store or even the diner for an occasional take-out order.

To the curious onlookers, she was more than just a forty-year-old woman living alone with her son on a little winding road near the river.  Her house, the last one on the road, was surrounded by almost an acre; a little guest cottage sat off to the side.  She rented that house out to a quiet, somewhat eccentric man who provided gardening services in exchange for a portion of the rent.  His name was Hugh Kincaid and she thought he probably had his own story.  But she respected his privacy too.

Her “back-story” included her years in the Bay Area, dabbling in that “hippies” scene in Haight-Ashbury during the Summer of Love and for awhile afterwards.  Her daughter Marigold had been born there.  And lost there.  Melody still felt the familiar wrench somewhere near her heart whenever her mind traveled backwards.  It had all been such an innocent time, despite the media hype.  Make Love, Not War.  She had never been able to figure out why mainstream society took such offense at the beliefs held by the counterculture.  She guessed it had something to do with people being afraid of anything or anyone they didn’t understand.

I would continue living in that house long after the book came out.  For thirteen years altogether.  Later on, the A-frame earned a makeover, seen here, and which you’ll see in the sidebar of this blog.

I have moved on from this cottage in the foothills, back to the city where my heart really belongs.  But a piece of my heart will always be in that little A-frame house that became a pivotal part of my first published book.

What pivotal moments in your life turn things in one direction or another?  Nowadays I call those happenings defining moments, which, incidentally, is the title of one of my current WIPs.

They stood poised at the beginning of his promising writing career, forming a circle of friendships that included a group of expatriates living a Bohemian life in Paris; among them were such notables as F. Scott and Zelda Fitzgerald, Gertrude Stein, Ezra Pound, and many others.

Ernest Hemingway had met and married Hadley Richardson in Chicago, a woman a few years his senior. He had already launched his writing life, and to finance his writer’s journey, Hemingway worked as a journalist for a time. His burgeoning writing career seemed to exist hand in glove with a hard-drinking and fast-living café life that did not celebrate traditional notions of family and monogamy. In these years, Hadley struggled with jealousy and self-doubt; ultimately, something major would smash their dreams of a lasting love.

A sometimes volatile relationship can still have, at its basis, a deeply abiding friendship, which overrides any great romance or grand passion, although they apparently had their share of those moments.

McLain has created a fictionalized version of factual events, digging deeper beneath the emotional layers of what other writers have chronicled about this first marriage of Ernest Hemingway. He would go on to marry four times in all, and his tragic demise was like the epilogue to a brilliant but captivating journey.

How Hemingway created his novels was also a fascinating exploration into the writer’s life. During his first marriage, he created and published The Sun Also Rises.

Throughout The Paris Wife: A Novel, I found myself wishing that events might turn out differently, that there might be a happy ending after all. What I found most satisfying throughout this story, however, were the playful and loving connections created at a tumultuous phase in the lives of these two, and how these connections would sustain them through some difficult times: bonds that would link them even after the marriage had ended. In a letter to Hadley, Ernest wrote of his admiration for her, and how she was the “best and truest and loveliest person I have ever known.”

Themes of loss, childhood trauma, and poor parental connections formed the foundation for what would unfold for these two, and for Hemingway himself in the years that followed. I thoroughly enjoyed learning more about this fascinating writer in the early years, with his “first love.” Five stars.