Today’s feature is a recent download:  The Night Visitors, by Carol Goodman, is a story of mistaken identities and missed chances, forgiveness, and vengeance. 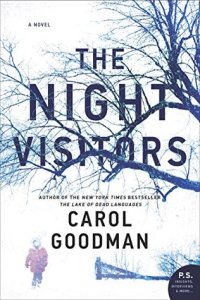 Oren falls asleep at last on the third bus.  He’s been fighting it since Newburgh, eyelids heavy as wet laundry, pried up again and again by sheer stubbornness.  Finally, I think when he nods off.  If I have to answer one more of his questions, I might lose it.

Friday 56:  I’m about to tell him no, we’ve got more important things to do, but then I think of all the promises he’s seen broken.  “Absolutely.  I know a great hill.  Go pick out a sled.  There are a couple in the barn.”

Synopsis:  ALICE gets off a bus in the middle of a snowstorm in Delphi, NY. She is fleeing an abusive relationship and desperate to protect…

OREN, ten years old, a major Star Wars fan and wise beyond his years. Though Alice is wary, Oren bonds nearly instantly with…

MATTIE, a social worker in her fifties who lives in an enormous run-down house in the middle of the woods. Mattie lives alone and is always available, and so she is the person the hotline always calls when they need a late-night pickup. And although according to protocol Mattie should take Alice and Oren to a local shelter, instead she brings them home for the night. She has plenty of room, she says. What she doesn’t say is that Oren reminds her of her little brother, who died thirty years ago at the age of ten.

But Mattie isn’t the only one withholding elements of the truth. Alice is keeping her own secrets. And as the snowstorm worsens around them, each woman’s past will prove itself unburied, stirring up threats both within and without.

Do the excerpts and blurb grab you?  Would you keep reading?