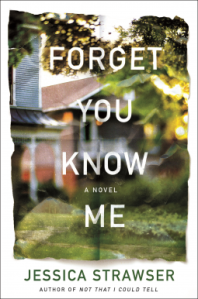 Molly and Liza have always been enviably close. Even after Molly married Daniel, the couple considered Liza an honorary family member. But after Liza moved away, things grew more strained than anyone wanted to admit―in the friendship and the marriage.

When Daniel goes away on business, Molly and Liza plan to reconnect with a nice long video chat after the kids are in bed. But then Molly leaves the room to check on a crying child.

What Liza sees next will change everything.

Only one thing is certain: Molly needs her. Liza drives all night to be at Molly’s side―but when she arrives, the reception is icy, leaving Liza baffled and hurt. She knows there’s no denying what she saw.

In disbelief that their friendship could really be over, Liza is unaware she’s about to have a near miss of her own.

And Molly, refusing to deal with what’s happened, won’t turn to Daniel, either.

But none of them can go on pretending. Not after this.

My Thoughts: The twists and turns of Forget You Know Me kept me fully engaged throughout, although it would take a while to sort out events. To figure out what, if anything, was left of the relationships between friends and between husband and wife.

Alternating narratives take us through the story, and I couldn’t help but be more drawn to Liza and her situation. Her friend Molly, who had done something truly confusing on the strange night of the video chat, seemed flaky and a little unreliable. What was really going on with her, and would she confess to her old friend, or even her husband, about what was happening?

Many events felt a little too unbelievable, but I did keep reading, because I was curious and wanted to know the meaning of it all. There were explanations by the characters at the end, leaving me with some hope for them all. 4 stars.

6 thoughts on “REVIEW: FORGET YOU KNOW ME, BY JESSICA STRAWSER”