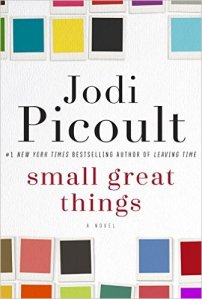 A story that delves into the power structure in our society, Small Great Things shines a light on both active and subtle racism, and forces us to look at how not really seeing the inequities in life situations can lead to disastrous consequences.

Ruth Jefferson was a labor and delivery nurse in New Haven, Connecticut, and had been for twenty years. Known for her skill and efficiency, as well as her professionalism, all who knew her would be stunned by the series of events set in motion by a father’s act of outright racism just after his wife had given birth.

An act by white supremacist Turk Bauer, demanding that Ruth not be allowed to touch his son, would lead to disaster and the death of that same infant. And subsequently, Ruth would be suspended…and later, arrested for murder.

How could so many things unravel so quickly? Picoult, who is best at zeroing in on social issues and injustice, brings us an assortment of characters and leads us through their lives, revealing their thoughts and feelings and experiences. Through alternating narratives, we see what brought them to this place in time.

How can Kennedy McQuarrie, the white public defender assigned to Ruth’s case, truly understand how best to defend her, when her training tells her that bringing up the race issue could work against them? How can Ruth, raised by a hard-working maid in a wealthy household, feel anything but resentful of Kennedy’s urge to stifle Ruth’s need to speak out on the issues?

The pages flew by, with each moment during the trial an intense series of happenings that could turn out any number of ways, and then…startling events brought everything to an unexpected resolution.

At the end, an epilogue carries us forward six years, where we see some very surprising outcomes.

***My copy of an e-ARC came from the publisher via NetGalley.