Welcome to another Tuesday celebrating bookish events, from Tuesday/First Chapter/Intros, hosted by Bibliophile by the Sea; and Teaser Tuesdays hosted by A Daily Rhythm.

Today’s feature is a book from an author I have enjoyed, and whose mystery series has brought to life one of my favorite heroines.  Sue Grafton’s latest is X (Kinsey Millhone Book #24).  I received my e-ARC from NetGalley:  release date – August 25, 2015. 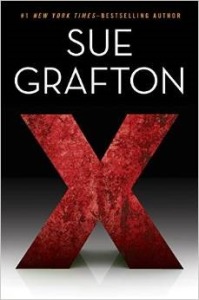 Intro:  In the Beginning:

Teddy Xanakis would have to steal the painting.  What other choice did she have?  She believed it was a Turner—a possibility she couldn’t confirm unless she shipped it to the Tate in London, where the Turner scholars, Evelyn Joll and Martin Butlin in particular, could make a judgment about its authenticity.  Unfortunately, the painting was currently in the basement of the house that was now solely in Ari’s name, where it had sat for years, unrecognized and unappreciated.  She might have blamed herself for the oversight, but why on earth would anyone expect to find a priceless painting in such homely company?

She and Ari had bought the house when they moved from Chicago to Santa Teresa, California.  The estate had been owned by the Carpenters, who passed it down from generation to generation until the last surviving family member died in 1981, having neglected to write a will.  The estate attorney had locked the doors and put the house up for sale.  Teddy and Ari had bought it fully equipped and fully furnished, right down to the rolls of toilet paper in the linen closet and three sets of sterling flatware in the silver vault.  The antiques, including several exquisite Persian carpets, were appraised as part of the purchase price, but in the process a small group of paintings had been overlooked.  The attorney had paid the taxes owed, handing the IRS and the State of California the hefty sums to which they were entitled.

Teaser:  (After the divorce)

Teddy made three trips to the house, thinking she could walk in casually and remove the painting without attracting notice.  Unfortunately, Ari had instructed the staff to usher her politely to the door, which is what they did.  Of one thing she was certain—she could not let Ari know of her interest in the seascape or her suspicions about its pedigree. (2%).

Blurb:  X:  The number ten. An unknown quantity. A mistake. A cross. A kiss.

X:  The shortest entry in Webster’s Unabridged. Derived from Greek and Latin and commonly found in science, medicine, and religion. The most graphically dramatic letter. Notoriously tricky to pronounce: think xylophone.

X:  The twenty-fourth letter in the English alphabet.

Sue Grafton’s X: Perhaps her darkest and most chilling novel, it features a remorseless serial killer who leaves no trace of his crimes. Once again breaking the rules and establishing new paths, Grafton wastes little time identifying this sociopath. The test is whether Kinsey can prove her case against him before she becomes his next victim.

I always eagerly await each new “alphabet book”…and I am as fond of the writing style and MC as I have ever been.  What do you think?  Do the excerpts pique your curiosity?  Does the blurb?