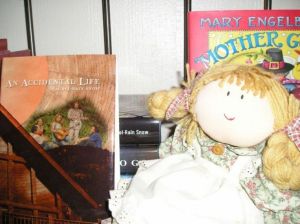 In this excerpt from An Accidental Life, two friends and colleagues have dinner together.  Karin muses about her relationships and vulnerabilities.

Two weeks later, Joyce and Karin sat in Karin’s condo, eating spinach enchiladas and sipping margaritas.  Ever since they’d made over Joyce’s apartment a few months ago, they’d met regularly for dinner at one or the other home.  It had become like a ritual and seemed to reinforce for them that they had a life outside the walls of their offices.  Where previously they had confined their friendship to the office and to the occasional lunch or movie, they had now added a new dimension with their dinners.

Karin liked having dinner with a woman friend.  It kept her grounded in reality.  She truly believed that she sometimes forgot who she really was when she was with Scott.  These feelings sometimes left her with a residue of guilt…For after all, wasn’t he what her real life was about?  But then she reminded herself of the person she was with other people, especially other women, and decided that it was probably inevitable that she would still mask her true self with him.  They didn’t really have a “commitment” per se.  They’d talked around the subject of exclusiveness a few times, but in the end, nothing definitive had been established.  They didn’t mention the future.  That ambiguity left Karin feeling vulnerable.