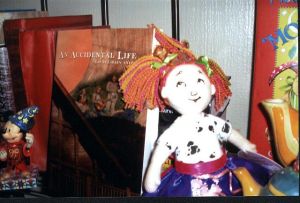 After months and months of feeling as though the other shoe would drop, Molly faces her darkest hour, in this excerpt from An Accidental Life.

She felt herself pulled back as if from a foggy distance.  Where had she been?  Blinking her eyes, she looked around, noticing finally that night had fallen.  She turned on lamps here and there, glancing uneasily out the window.  Had she been writing all this time?  She held up the journal and counted out several pages.  Sometimes, when she wrote, she found herself seemingly transported to another reality.  Her ramblings, as she called them, took her across time and space.  But it was a soothing exercise and one that had become like a crutch.  As the words flowed onto the pages, the tension and anxiety seemed to dissipate.

When had Chase said he was coming over?  She padded out into the kitchen and opened the fridge, cursorily examining the contents.  She retrieved a bottle of juice and poured.  She drank the liquid quickly, thirstily, and then moved back into the living room, sinking into the cushions of the sofa.  She closed her eyes, conjuring up Chase’s face.  She had come to rely on him, she realized, which, for some reason, created an apprehension deep inside even as her heart throbbed with the memory of him.

When she heard the doorbell, she immediately concluded that Chase must be here.  She eagerly glided toward the door, wondering why he hadn’t used his key; smiling to herself, she decided that he must have thought she’d be startled, since she wasn’t used to him having a key.  She flung the door wide, her smile beaming.  Her brow creased slightly as she studied the person on the threshold.  A question formed on her lips, even as the person pushed his way in, with that strange little smile.  He adroitly closed the door behind him.  “At last our moment has arrived!”  He grinned, as if they had a private joke.  He grabbed her hands, and as he held them, he stroked them softly.